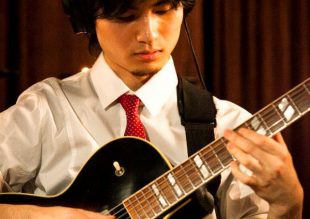 Born in Tokyo, Japan 1986. Yuto Kanazawa is a jazz guitarist and composer graduated from Berklee College of Music, Jazz Composition B.M. in the fall 2009. Kanazawa grew up in Tokyo and Fukushima, also studied at Koyo Conservatory Kobe, before moving to the United States. At Berklee, he had learned under such greats as Mick Goodrick, Tim Miller, Hal Crook, Dave Santoro, and Greg Hopkins. The Grammy-nominated arranger and trombonist, Phil Wilson, personally recruited Yuto for Berklee’s Rainbow Bigband. The experience would be a serious training ground for Kanazawa.

Kanazawa also has toured Japan three times – most recently including a sold-out concert in his hometown of Shirakawa City, Fukushima. One notable composition on the “Earthwards” album is entitled “The Ocean”, which is a meditation on the tragedy of the Japanese Earthquake and and Tsunami of March 2011 – an event that deeply affected Kanazawa and his homeland. Kanazawa performed “The Ocean” on the radio program “The World” presented by BBC in February 2013.

Music of “Earthwards” is also featured on Kanazawa’s new collaborative project “The United East Jazz Quintet” with Korean and Japanese young jazz musicians based in New York and Boston. The band toured total 12 locations in Korea and Japan performing concerts and giving clinics for college and conservatory students in June 2013. As an educator, he launched lesson blog “Learning Center” on his website to study and introducing musical ideas and techniques perceived from his unique point of view. Kanazawa’s basic approach for teaching is to support students achieving maximum benefits from practice.